Thermography & Health Solutions is about offering a variety of services that fulfill your body's needs as a whole. We are more than happy to answer any of your questions or explain in more detail what it is that these services can do for you.  Scroll down thru the services below.

Medical Thermography is a noninvasive diagnostic technique that allows the examiner to visualize and quantify changes in skin surface temperature. An infrared scanning device is used to convert infrared radiation emitted from the skin surface into electrical impulses that are visualized in color on a monitor.

This visual image graphically maps the body temperature and is referred to as a thermogram. The spectrum of colors indicate an increase or decrease in the amount of infrared radiation being emitted from the body surface. Since there is a high degree of thermal symmetry in the normal body, subtle abnormal temperature asymmetry’s can be easily identified.

Medical Thermography major clinical value is in its high sensitivity to pathology in the vascular, muscular, neural and skeletal systems and as such can contribute to the pathogenesis and diagnosis made by the clinician.

Medical Thermography has been used extensively in human medicine in the U.S.A., Europe and Asia for the past 20 years. Until now, cumbersome equipment has hampered its diagnostic and economic viability. Current state of the art PC based Infrared technology designed specifically for clinical application has changed all this.

Skin blood flow is under the control of the sympathetic nervous system. In normal people there is a symmetrical dermal pattern which is consistent and reproducible for any individual. This is recorded in precise detail with a temperature sensitivity. 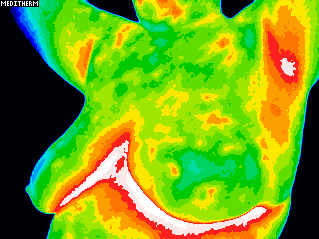 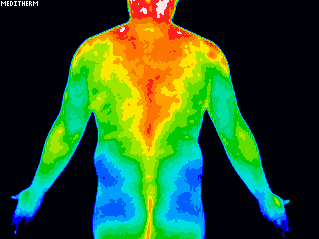 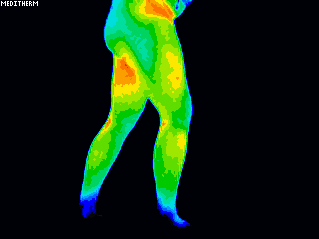 Electro-Lymphatic Drainage Therapy is a gentle, light touch non-invasive technique to stimulate the proper flow and drainage of the lymphatic system. A combination of vibrational, light, and electrical waves that are encapsulated in the wands; help to stimulate the flow by causing the dissociation of proteins that have become trapped in the interstitium. When trapped proteins (not to be confused with nutrient proteins) release their bond, the stagnate lymph is liberated and will flow out into its normal filtration and reabsorption channels. This technique offers qualified therapists a natural complement to their existing healthcare protocols.

Think of a jar of water with gelatin that is very thick and gelatinous, which is similar to congested lymph. If you shake the jar the liquid becomes more fluid. The vibration of the instrument works in the same way to break up the lymphatic congestion with in the whole body.

The Libra Litrou™ is an instrument which aids in detoxifying the body and balancing the energy fields, which enhances vitality and improves and strengthens the body’s ability to heal itself. The electrically charged water balances the body’s energy meridians by infusing and realigning the energy field. This experience can be compared to the benefits found from natural hot springs and may be beneficial for facilitating healing in a number of conditions. 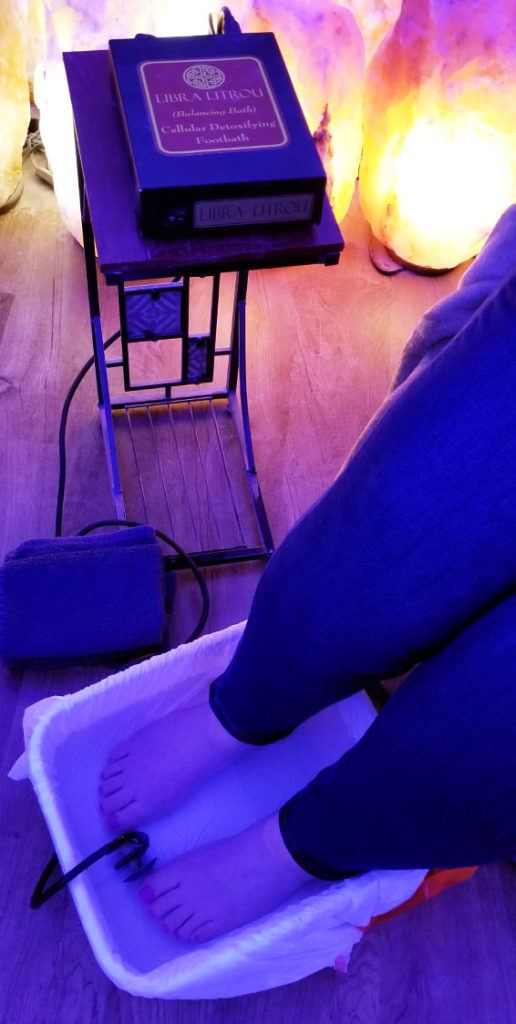 The human body is comprised of 70% water, so it's not much of a stretch to say that "the basis of vitality and long life is water." If you want to feel good and be at your optimal health level, you should drink water on a daily basis. But not just any type of water.

This type of water is perfect for drinking and healthy cooking. This electrolytically-reduced, hydrogen-rich water works to restore your body to a more alkaline state, which is optimal for good health. Usage: drinking, food preparation, coffee and tea, soups and stews, and watering plants.

Kangen Water® is also friendly to your budget and to the Environment. Forget about buying and storing all those expensive plastic water bottles!

Breathe deeply. Our pure essential oils and essential oil blends take you on a sensory journey that can instantly create a calming or balancing connection in the body.

Love the way the spritz of fragrance from a fresh orange peel can brighten your day? Each essential oil’s complex, pleasant, and unique scent activates the limbic system—the brain’s center of emotion and memory—differently. Essential oils can be your key to a more fulfilling and balanced emotional life. 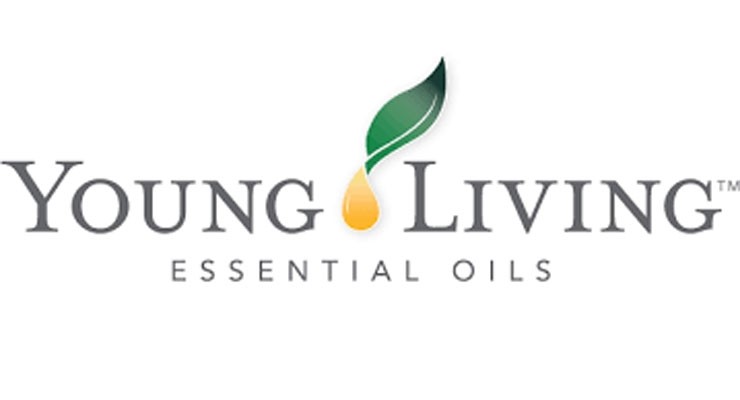 Vitality Dietary Essential Oils Perfect for adding flavor to your favorite foods or using as dietary supplements, the Vitality line of dietary essential oils gives you the freedom to share and explore some of our best-loved essential oils in a variety of nutritious and delicious ways. Discover Vitality—for food, for family, for life! 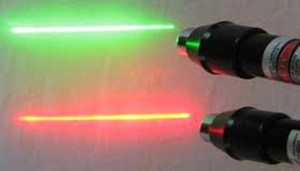 Laser Energetic Detox (LED) is a therapy refined by Lee Cowden, MD, one of the most respected names in bio-energetic medicine.

Laser light is passed through a homeopathic vile and distributed over the body in a sweeping fashion to effect a release or resolution of the issue being addressed. It is a highly effective rapid detoxification therapy that helps alter the way toxins affect the body. Some people improve in 24 hours, rather than in weeks or months.

ZYTO is a technology company that produces health related software and equipment to facilitate decision making about healthcare and wellness. ZYTO technology is based on the body's ability to respond to subtle stimuli. Using the body's natural energetic field, a communication link is established between the patient and the computer via the ZYTO hand cradle. Through this connection, ZYTO sends stimuli and then records the body's response. This conversation is called biocommunication, and it provides insights into health and wellness.

EVOX is Life-Changing Perception Reframing Technology. The EVOX system works directly with a client’s personal perceptions. Perception is the way we feel and think about different events, people, or other aspects of our lives. In many cases, we are not even consciously aware of everything that we perceive, or how those perceptions affect us. Using a process known as Perception Reframing, the EVOX system helps clients discover a whole new way of seeing things. 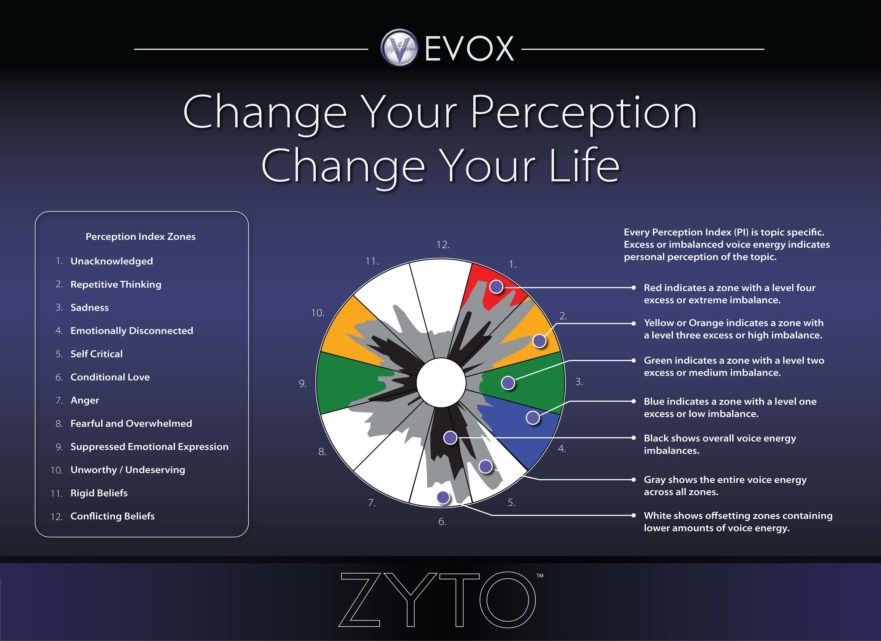 The EVOX uses the voice (VOX is Latin for voice) to create visual maps of a client’s perceptions about specific topics like health, relationships, work, or athletic performance - really any aspect of life.
The client speaks about any topic and the EVOX records the energy of the voice. The voice energy is then plotted into what is called a Perception Index, or PI. The Perception Index gives the client a visual image of their perception as it pertains to the topic discussed.

Most perceptions are static

Clinical trials and experience have shown that most perceptions are static. This becomes especially undesirable when perceptions are dysfunctional in any way. For example, a golfer may always approach the ball the same way and thus reach a performance plateau. At a conscious level she may learn better techniques, but at a subconscious level she is still bound by the perceptions she carries about her golf game, or about her ability to master it. In other words, her golf game remains static.
In the case of relationships, a person may repeatedly attract destructive behaviors. This is the result of a static perception that perpetuates dysfunctional outcomes regardless of a conscious desire for a healthier relationship.

In the EVOX, a static perception can be reflected when speaking about a single topic multiple times that results in a PI that is the same or very similar. With the EVOX system it is possible to quickly and painlessly shift, or re-frame, perception at both a conscious and subconscious level. Perception re framing allows for a more mature or functional reality, and can be used to improve any aspect of human performance.

Users of the EVOX system have reported positive impacts on various aspects of their life, including: